Siddhārtha Gautama, who was a historical man, a prince of Sakya clan, son of King Suddhodana, lived in Kapilavastu castle nearly 3 thousand years ago. Siddhārtha was born on the full moon day of Vesak month, corresponding to the common calendar May, in the year of 624 BCE under the root of Ashoka tree in the Lumbini park, Nepal today. Siddhārtha means the fully-contented man with sufficient merit and wisdom. 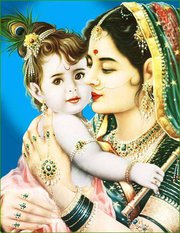 Seven days after the prince was born, his mother, Queen Māyādevī, died. His stepmother, who was Mahāpajāpatī Gotamī looked after him. When he reached at the age of 16, he married princess Yasodharā and had an only son named Rāhula. 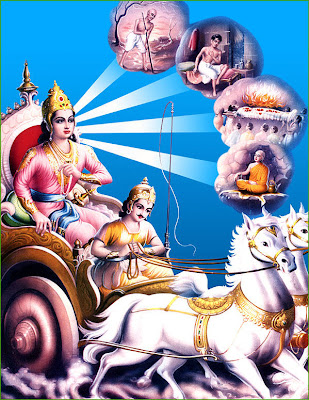 Living in the lap of luxury, wealth and happiness, but the prince, who still felt unfree and uncomfortable, along with his intimate named Channa, made a trip out of the four gates of the royal palace to visit the real world outside. Getting out of the gate, going to the East, the prince and Channa met an old person; going to the West, they met a sick person, going to the South, they saw a dead person; and going to the North, they met a mendicant. One of the four real scenes the prince witnessed, the fourth scene was not only a comtemplative subject for him, but it also created the inspiration for him later on to become a homeless monastic, living without family and not being bound by family and children. 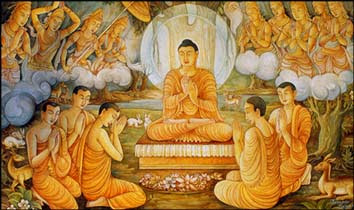 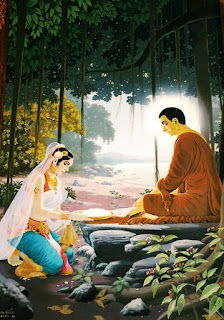 After Bodhisattva became the Buddha, Brahma Sahampati requested him three times to preach the Dharma and to instruct human beings. He finally agreed with the latter’s requests, and sought out two previous ascetics to spread the Dharma, but both of them died. Going to Deer Park (Migadava) in Sarnath, the Buddha preached the First Sermon (Dhamma Cakka Pavattana) to five fellow practitioners. They all understood the wonderful Dharma fully and obtained Arhanta. Thus, the Buddha, Dharma and Sangha are formed there.

The Buddha and His Sangha, who mainly depended on meditation – concentration, and on patrons’ alms-giving to nurture their minds and bodies, relished dwelling in the natural environment, and achieved self-attainment, joy and happiness all by themselves to instruct other people. Living their familyless lives, they who had much time to cultivate and serve human beings relied on sentiment of teacher and students, that of Dharma friends, that of fellow monks, sentiment of protecting the Dharma and propagating it to benefit living things and living beings.
Next, the wealthy millionaires Dasa, his family, his friends and acquaintances were instructed by the Buddha, and made His disciples. Among them, His most virtuous and renowned disciples are listed below:
The honored Elder Sāriputta – the chief Monk with supreme wisdom,

The honored Elder Moggallana – the chief Monk with supreme piety and psychic power,
The honored Elder Maha Kassapa – the chief Patriarch of supreme ascetic cultivation,
The honored Elder Subhuti – the chief Contemplator of supreme emptiness (Suññatā),
The honored Elder Purana – the chief brilliant Preacher of the supreme Dharma preaching,
The honored Elder Kaccayana – the chief outstanding Commenter of supreme Buddhadharma interpretation
The honored Elder Anurudha – The chief Monk with unobstructed vision, that is, supreme Clairvoyant supernormal vision,
The honored Elder Upali – the chief exemplary Lawyer of supreme Vinaya or Discipline observance,
The honored Elder Ananda – the chief Monk with the ability to hear a lot, acquire, and remember the Buddhadharma in detail supreme,
The honored Elder Rahula – the chief Monk with the supreme patience, solemn dignity and fine action.
When His disciples became a large crowded, the Buddha encouraged and counseled: “O Bhikkhu! Go forth to many different directions to propagate the Dharma and save sentient beings, bring your own cultivation, joy and happiness to instruct other people. Out of peace and happiness for devas and human beings, spread the Dharma to all beings. The tathāgata’s teachings are perfect in the beginning, perfect in the middle, perfect in the end, both in the spirit and in the letter. Proclaim the holy and peaceful life to the many all over the planet.” (See Mahāvagga 19 – 20).
Afterward, the Buddha taught and converted very many different kinds of people, of walks of life, such as kings, mandarins, merchants, servants, even excrement-collectors, murderers and courtesans. The World-Honored One’s Dharma and His Sangha have the capability to accept people from different castes, religions, skin colours, races, etc. Those who have enough conditions to cultivate, to learn, to understand, to practice, and to apply the Buddha dharma in their daily lives mindfully and awakeningly, can bring peaceful joy and authentic happiness to themselves and to others right here and now in the present life.
The Buddha’s disciples mainly include two Assemblies: Assembly of Monastics and that of lay Buddhists. Both of these Assemblies that support one another as an image and its shadow make the key factors together bring Buddhism into life, and help add happiness to life and lessen suffering.
Propagating the Dharma in 45 years, all that the Buddha taught is like a handful of tree leaves in the palm of his hand, is to help people recognize suffering and transform it, and to help them live their peaceful and happy lives right in the present world.

Before entering Nirvana, the Buddha counseled His disciples: “”O disciples! Everything is impermanent and changing. Make efforts to cultivate and practice the Buddha Dharma more, to bring joy and happiness to yourselves and to others. These are My ultimate teachings for you.” (See Dìgha Nikāya – Mahāparinibbāna sutta Part II, 16).
Existing on this earth for eighty years, in about 544 BCE, at the age of 80, the Buddha who passed away peacefully lay on his right hip, left leg stretched out on right leg, his head turned to the North under two ancient trees in the Sala forest in Kusinagar District, India today.

Lịch sử đức Phật Thích Ca Mâu Ni tóm tắt-Thích Trừng Sỹ
To pay homage and profound gratitude to World-Honored One, each of His disciples must himself or herself live right with the Dharma by not doing the evil, by doing the good, by keeping a pure body and mind. Each of us has to be a gift of cultivation, peace, joy, and true happiness to be dedicated to himself or herself and to others right in this life.

May you all be well and imbued with the Dharma of World-Honored One!
By Ven. Thich Trung Sy